June is Music to My Ears

June is a busy month for Downtown Silver Spring with a big focus on music.  I was really hoping to see more local event related bar/lounge/restaurant and specials. You'd think the area's venues would have capitalized on the festivals/events happening in town and piggy back on those?  I feel like they are missing out on huge marketing opportunities to take advantage of the crowds that will already be in town for the large events.  For example, Silver Docs has previously had 27,000 people throughout the week. Might be a good time for the restaurants on Colesville or others nearby to promote local happenings related to the featured events to generate business...


I'll be keeping this list updated through the month of June so check back frequently!


Friday, June 8, 1pm.  Euro 2012 kicks off with Poland vs Greece and Russia vs Czech Republic. McGinty's will be showing all the games live downstairs and upstairs with their huge HD pull down screen.
911 Ellsworth Drive


Friday, June 8 - Saturday, June 16. Related to the event listed above -  Silver Spring's first ever Blues Week. During this week they expect to have lives Blues performances, food, and drink specials "throughout DTSS" as per the Silver Spring Blues site. However the only venues I saw mentioned are Fire Station 1 (but nothing about this is listed on their website), McGinty's (performance by Patty Reese Thursday night) and Zev's Coffee Cafe (mention of an acoustic performance).  There are also plans to present Blues bands on Veteran's Plaza during the week.


Saturday, June 9, 8pm.  Luis Enrique at The Fillmore.
Luis Enrique is big time throughout Latin America.  He's a Nicaraguan salsa singer who received a Grammy for his album, Ciclos, for Best Tropical Latin Album. If you like salsa dancing, this is the place to be. Free parking in the nearby garages after 6pm.
Tickets are $35.
8656 Colesville Road


Sunday, June 10, 1pm - 6pm. 3rd Annual Washington Revels SunFest: Music and Dance from around the World in Downtown Silver Spring.
Their mission as per their website: "SunFest is a summer solstice celebration of world cultures hosted by Washington Revels. Designed to give both professional and non-professional performers and groups an opportunity to shine and share their cultures, the festival features traditional performing arts – music, dance, drama, and storytelling – from around the world, creating connections among diverse communities".  They are still looking for volunteers. More details here: I wanna be involved in my community and volunteer!.  They are also still looking for Performing Art Groups that represent African, Latino, Caribbean, Asian, American, & European heritages. More details here: I'm not afraid to get on a stage and shake it!.
On Ellsworth Street between Georgia Avenue & Fenton Street (including Silver Plaza)

Saturday, June 16, 10am - 11pm. 4th Annual Silver Spring Blues Festival.
There will be 2 stages of performers. Here are the details on schedule of performances. Celebrity Emcees include Ida Campbell, Host of "Don't Forget the Blues" on WPFW-FM and Cortney Hicks from Majic 102.3.
Festival locations are the Fenton Street Market on Fenton Street (corner of Ellsworth) and Silver Plaza on Ellsworth Drive

Saturday, June 16th, starting at 10pm.  After party from the Blues Festival at McGinty's.


Remaining shows - thru June 16:. The Illusion by Tony Kushner at Round House Theatre Silver Spring (right next to the AFI Movie Theater)
Desperate to reach his long-lost son, an aging father turns to a sorcerer for insight. As the sorcerer conjures three episodes from the young man's life, his father is led deep into a maze of romance, intrigue, conspiracy, and murder. But just how much of it is true? In his witty and passionate adaptation of Corneille's seventeenth -century classic L'illusion comique, Tony Kushner weaves illusion with truth --and theater with real life.  Featuring: Aaron Bliden, Joe Brack, Gwen Grastorf, Brian Hemmingsen, Mark Halpern, Nanna Ingvarsson, Scott McCormick, and Brynn Tucker
Dates/Times:
Thursday June 14 at 8:00pm
Friday June 15 at 8:00pm
Saturday June 16 at 2:00pm and 8:00pm
For more information, or to buy tickets visit http://www.forum-theatre.org/the-illusion
TICKETS: call the Round House Theatre Box Office: 240-644-1100
8641 Colesville Road

The Vinyl District is hosting this awesome event alongside Som Records and DC Soul Recordings. As per their website, "This edition of the DC Record Fair will feature 40 vinyl vendors from up and down the East Coast, our patented line up of guest DJs spinning on the hour, local vintage clothing and handmade craft pop-up shops, and a screen printing station run by Pyramid Atlantic Art Center". They also made a note to point out that "The Bloody Mary bar remains a constant" (which personally, I'm excited about).
8656 Colesville Road


And here is the crescendo for the month of June...


Monday, June 18 - Sunday, June 24. The 10th Annual AFI-Discovery Channel Silverdocs documentary festival.
Silverdocs is a 7 day festival featuring documentaries from around the world with 44 countries represented. This year they are featuring 118 films and they expect 27,000 festival attendees throughout the week. It will take place in and around Downtown Silver Spring.  You can browse the movies and buy tickets HERE.


Here are the 5 Festival locations for screenings: 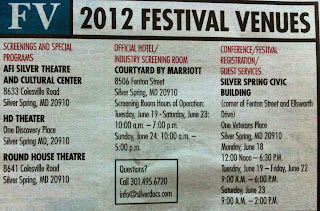 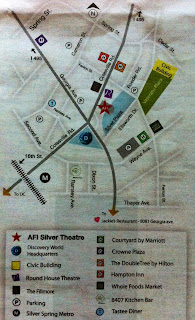 The festival will open with Ramona Diaz's Don't Stop Believin': Everyman's Journey, also featured at the Tribeca Film Festival, is a fascinating documentary about Arnel Pineda, who went from Filipino You Tube sensation to lead singer of Journey.


This year's SIlverdocs are heavily focused on music.  Here are a few that sound fascinating with descriptions as quoted from http://silverdocs.com/:


Metallica: Some Kind of Monster  http://silverdocs.festivalgenius.com/2012/films/metallicasomekindofmonster_joeberlinger_silverdocs2012


Searching for Sugar Man - "Rodriguez, cuts a couple of records in the early ‘70s. They flop; what’s new? This is new: They become wild successes in, of all places, South Africa" http://silverdocs.festivalgenius.com/2012/films/searchingforsugarman1_malikbendjelloul_silverdocs2012


Under African Skies - "Inspired by the unique rhythms and harmonies he [Paul Simon] was  hearing from South Africa, Simon traveled there on a whim to record the album using local musicians"
http://silverdocs.festivalgenius.com/2012/films/underafricanskies4_joeberlinger_silverdocs2012


Tchoupitoulas - "An impressionistic and dream-like journey through the nightlife of New Orleans"
http://silverdocs.festivalgenius.com/2012/films/tchoupitoulas_rillross_silverdocs2012

Not in Downtown Silver Spring, but just a couple stops away, and sounds like a fun contest using your knowledge regarding local businesses:


June 18 - 22 - Metro Madness on the Red Line: Win $250 to Get Around Town - a chance to win hosted by MetroPointe Apartments. All you have to do to enter the sweeps is simply “like” the MetroPointe Page on Facebook and fill out their entry form to be entered to win either a $250 SmarTrip® Metro Card or a $250 Visa gift card. For the opportunity to win more entries in the sweepstakes, one should check their Facebook page every day during the week of June 18-22, 2012. They will be giving away clues about local businesses along the red line and everyone who answers the clue correctly for that day will receive one extra entry in the sweepstakes. Some of the local businesses being featured in the sweepstakes have partnered up with MetroPointe to add some extra goodies to the $250 grand prize.
MetroPointe - 11175 Georgia Avenue


Know of an event I missed? Please hit me up here!